For a long time I had Macau on my wish-list but learned already a long time ago that there was one big challenge; operating location! Although there are lots of hotels, there are very few hotels at the beach and on the north side of the Coloane Island. The Pousada de Coloane hotel is radio amateur friendly but is at the southern part of the island and surrounded by mountains. This is certainly not a preferred location as you need take-off in northern direction. I had tried some years ago to get permission to place antennas on the roof of a hotel down town, but that did not work out positively.

Recently I considered the Grant Coloane Resort for an operation. I collected lots of photos and used Google Earth to examine to situation and came to the conclusion that when operating from the top level of the hotel, it should be possible to have take-off to the north. Obviously, reality may be different once at the spot, but for me it looked an acceptable situation. Although I found a possible location, I still had to ensure that the hotel would allow me to place an antenna at my balcony. I made my request and had to provide some more information and a picture of how this would look like. Finally I got an OK and that was the starting point for the planning and preparations.

Although I could follow my standard preparation for such a trip, I still continued to rethink the antenna situation. What if it turned out to be completely different or I would encounter problem that would require a completely different approach? Since I operated with a vertical wire on a fiber pole already from PJ2 and CE0Y, I decided to take that antenna with me in the first place. Using a 15 tall fiber pole, you get at least 10 meters above the roof and the whole antenna will remain on my own balcony.

I did consider bringing a doublet with open line feeder, but for such an antenna you need support at the end of the dipole and I was not sure if I had that space. Next I built a vertical dipole with open line feeder (design by DJ0IP) as it could be a good alternative. However, it required bringing an additional symmetric antenna tuner and I had no experience with that antenna. Later on I decided to leave the doublet and vertical dipole at home for weight reasons.
Finally I packed just the vertical wire with fiber pole and ended up with my usual arrangement: 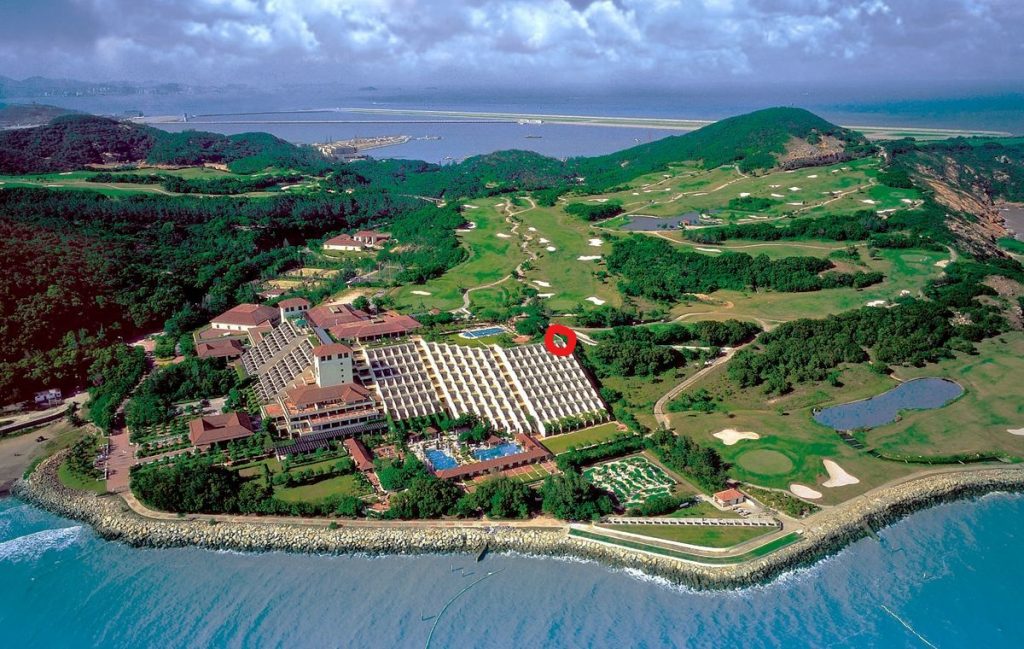 My room is indicated by a red circle (top-right). The runway of the airport in the background.

My license application was arranged in advance but the actual license would be issued when I came to the office of DSRT, the government unit that deals with the licensing. They also arranged the import license for my equipment.

I left Amsterdam for the first leg to Xiamen where I had to wait for eight and a half hours for my next flight to Macau. All luggage arrived and left the airport for a hotel (offered by the airline) down town. At customs there were no questions about all the equipment. So after I did some sleeping and refreshment, I went back to the airport and boarded my one and a half hour flight to Macau.

At the airport there were no questions about my equipment so I could easily walk outside but I went to customers to show them my import license. I wanted to make sure that I would not encounter issues on me return trip. The inspected the documents and equipment and signed off the paperwork.

The airport is only 15 min. drive by taxi from the hotel. Although requested and confirmed, I still had to see if I would get the right room. But I was directly told that I had my room on the top floor, Ocean view and at the end of the hotel wing.

Directly after I moved into my room, I explored the environment and how I could set up my antenna. It was already late afternoon and I needed to have the antenna installed and checked as soon as possible as in the darkness it would too difficult. I needed to organize something to keep the base of the pole in place and the only thing I had was some flower pots. I went to the reception and asked if an engineer could help me. This was no problem and 10 minutes later technician Ken arrived. I explained that I needed something to keep the pole in its place on the balcony floor. He suggested to have something like a stand for a large umbrella and 15 minutes later he arrive with a heavy square iron plate with an iron tube. This was the perfect solution. We placed it in the middle of the balcony.

In the meantime I had stretched the fiber pole to its full length, added insulation tape on all joints (to avoid the pole collapsing when it came under tension) and also taped the wire to the pole. Also a guy ring and 4 guy wires were already fixed. We placed the pole in the tube of the base plate and when I kept the pole straight up, Ken fixed the 4 guy wires. Next I connected the 6 radials to the balun and divided them over the balcony.

Next I tested the antenna with the K3 and the SWR was as expected and with the built-in ATU of K3 it was easy to have a good SWR on all bands. Now everything was ready, I took a shower and went to bed. The next morning I had to visit DSRT to collect my license and in the afternoon the technicians of DSRT would visit me in the hotel to do an inspection of the station.

The next morning I was around 9 AM at DSRT office where I met two very friendly people who had all my paperwork ready. In had to place my signature after which they came back with a sealed credit card size license. The next step was to visit the finance department to pay the license fee. Once that was completed, I did some sightseeing and bought some food stuff for the coming days and went back to the hotel.
Around 3 PM two technicians of DSRT came to my room for the inspection. They inspected the antenna, radio, did some power measuring and after that I received (also sealed and credit card size) the operating permission. After they left, I started directly my operation.

Demand from Europe and US were high and I knew that Japan would be very strong and forming a wall between me and Europe and US. However, we all know that JA’s are very cooperative and from other experiences I also know that propagation sometime will let JA’s fade away and Europe and US becoming stronger. I did work lots of JA’s but with the cooperation of JA’s and the help of propagation I was able to work a reasonable number of EU’s and K’s. Certainly many people will be disappointed for not making it in the log as I was too weak or not at the right band at the right time. Don’t worry there are several operators and groups planning to be active, so everyone gets a chance again.

In general, during daylight there was no (good) propagation so my rhythm was operating in de late afternoon, evening and morning and sometime also during the night. I tried to sleep during the off-hours but that was confusing my biological clock quite a bit.

During my stay it was very hot and only a very few short rain showers. That was ideal for taking down my antenna on the Monday morning and packing all the luggage and equipment and next to move to the airport. However, on Monday morning there was a thunder storm and very heavy rain. I didn’t want to wait until it would become dry as also my fiber pole and wires needed some time to dry.

I decided to go on the balcony in my underpants and started to take down the fiber pole and wires and moved it into my room and started cleaning and drying it with a towel and let it further get dry in the room. When this was all done, the weather cleared up and it was sunny and hot again. I took a taxi to the airport and flew back to the Netherlands via Xiamen.

My approach for this operation was to have a simple setup (to avoid problems with the hotel with regard to the antenna) and to pay more for my room to have a more favorable location. My conclusion is that this was the right approach and was able to help many people with a new country. Again thank you all for your cooperation and patience in the pile ups.