The second easiest island to visit when located in Kuala Lumpur is Pangor Island which is some 4 hours drive away. Because of the monsoon season, you should only visit the islands on the east coast from March till November, so this was a good time to select once again an island on the west coast. Pangor Island has quite a number of hotels and resorts but I had decided to look only for a resort that has villa’s or chalets as to have more space for antenna’s contrary to hotel where the antenna space can be quite limited and unpredictable. From searching on the internet and from Google Earth, I selected Teluk Dalam Resort for being on the northern part of the island and having an open view to the north.

As this trip was a short family holiday, I had to make sure that my radio activities would not be too dominant and so I had to find a balance between radio operation and sightseeing, shopping and other social activities. From a map of the resort which I found on the internet, I could locate some favorable chalets and asked for those particular locations at the time of booking.

After arrival at the resort, I was very pleased to see that they had awarded my request for a particular chalet and the adjacent chalets were not occupied. This would limit the risk of RFI complaints from neighbors. 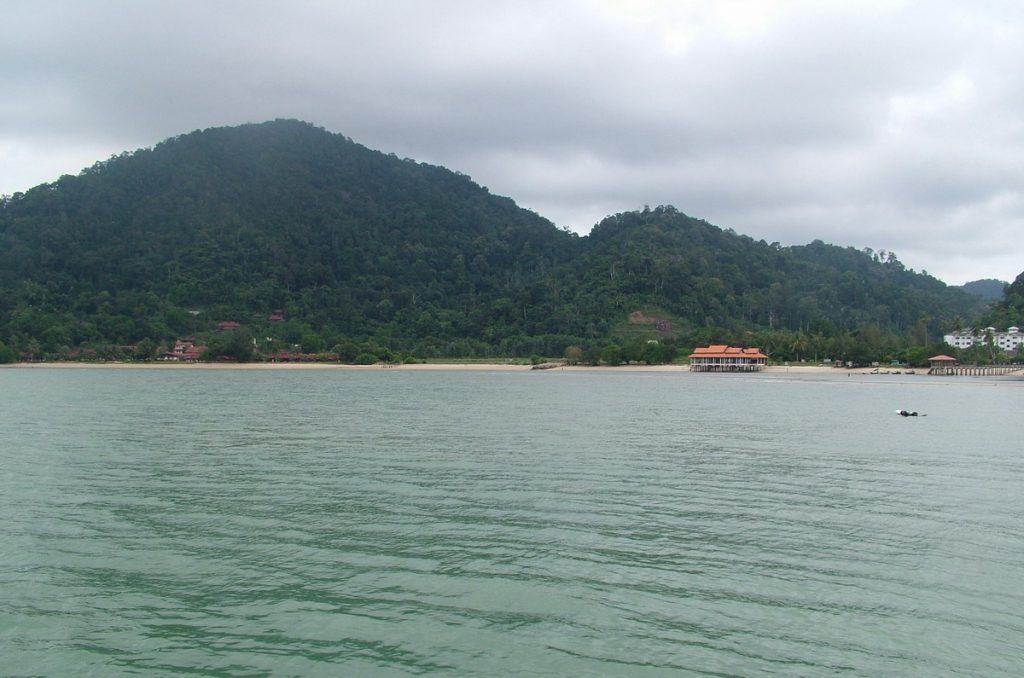 I started to build up the ECO R7+ vertical in the garden of the chalet. As there was no good place where I could fix the base of the antenna, I decided to place it in the middle of the garden and using guy wires to keep it straight up. With some help this was fixed quickly.

The station was put together on the bar in the living room. Together with a tall chair this was a good operating position. As I just got a new laptop, I could no longer do the keying over the LPT-port. Reason enough to use the microHAM for communication over the USB port, including keying. At the same time I switched from CT to the N1MM logging program.

My first observation on the radio was the very quiet bands and actually no noise at all. This was clearly an excellent location for a radio operation. The Teluk Dalam Resort was at the bottom of a U-shaped bay overlooking the sea to the north and having a mountain at the back.

I was very excited about the operating conditions but the propagation was not too good and most likely my signal was very weak. I had long CQ-sessions which resulted so now and than in a QSO. On a few occasions I had a small pile-up which was a welcome change. With no noise or QRM, I was able to pick very weak signals and that was really fun. Beside Japan and the US, Australian and European stations have also been logged. In total I made just only a total of 270 QSO’s.

From my observations, the location is perfect but results will probably much better when located just next to the beach. For a next occasion I should also consider bringing my Spiderbeam. But still there are quite a number of other island I want to air so see you again from another island.