Early 2021 I came across the design of the DX Commander by Callum McCormick, M0MCX. Callum is maintaining a web site with lots of details of the antenna and he also made a lot of great video clips explaining how it works and how to build. For me this was an antenna that perfectly fits me requirements for my DXpeditions and it covers 10-40 meter bands. I have used several antennas for my DXpeditions over the years, like R7000, ECO R7+, Magic antenna (12.85m wire with 1:4:9 balun).
I love building antenna, so I was more interested to build everything my self rather than buying it as a kit from Callum his web site.

The first version was following the instructions as given by the documents and articles on the web site of Callum (https://www.m0mcx.co.uk/). I decided to make already a few mechanical or practical improvements. I did have already a 10m fiber pole (GFK from DX-wire.de) which was suitable for the job. The transportation length of this pole is 134 cm.

The aluminum base plate and radiator plate were cut from 3mm plates material I had available. The guy plates/spreaders I cut from breadboard (available from all kind of shops, I purchased from IKEA). This material is easy to work with and strong enough for the job. The disks with a diameter of 15cm were cut with a saw and smoothed out with a file. The big holes in the middle (to fit around the pole) were cut with a hole-saw and fine tuned with a file.

The radiator wires were made of VD wire 1.5mm2, following the instructions of Callum. The radials I made from 0.75mm2 twin cord. It is cheap and ripping up the two wires give you double the number of radials. I made 5 sets of 4 radials soldered to one cable lug.
Once I had all pieces in place, I could erect the pole and start performing measurements and fine tuning of the radiator wires. Once the SWR on all bands were satisfactory, I packed all materials in a case, ready for transport.

The first use was for my 5T1GM DXpedition to Arguin Island (AF050). At the airport the case was checked-in as odd sizes and arrived at the destination without problems.
The DX Commander was assembled in about 1 hour after which it could be erected and all radials connected and spread around the antenna. No further tuning was required and operation could start.

For me the DX Commander proofed to be a very suitable antenna, depending on where you go and what you want to do. But with the experience of building my first DX Commander, I had several ideas on improvements.

This version is an improved version and the description below is to help you to construct your own. For the next version of the DX Commander, I wanted to have a different pole for a number of reasons. 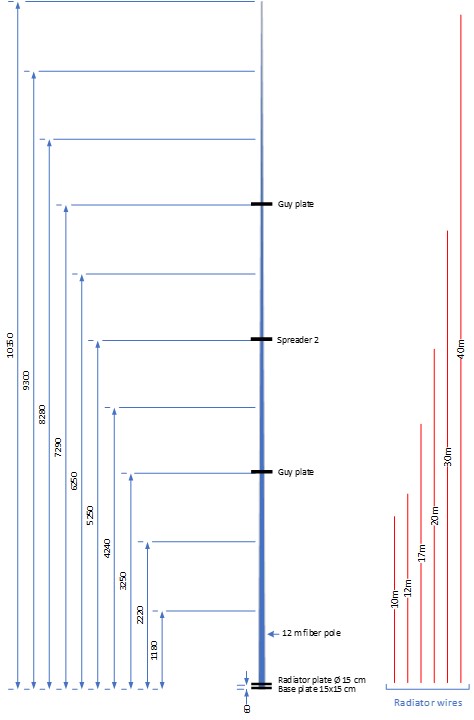 1. With the 10 meter GFK mast I had a practical issue to extend the 20m radiator wire with the shock cord. The wire just reached the spreader, so I had to use a long shock cord to the next spreader but also the carabiner hook with the end loop of the radiator were ending exactly at the place of the spreader.
2. The idea was to fit the complete antenna in a rifle case. Cases that can accommodate 120cm poles is better/cheaper available and for transport in smaller airplanes, long cases can become complicated.
3. Select a pole that is more stable in heavy wind conditions.

Based on the above, I have chosen a 12 meter fiber pole from Spiderbeam of which I don’t use the two upper sections. The dimension of this pole is 120 cm transportation length, diameter at the bottom 55 mm and on the top section 17 mm.

First you have to make the clamps that will secure the sections to stay in place. I used stainless hose clamps of different sizes and they are covered with a rubber protection profile to avoid damage to the fiber pole (available from https://www.iq-parts-shop.com/en/rubber-cr-nbr-c-profile.html). 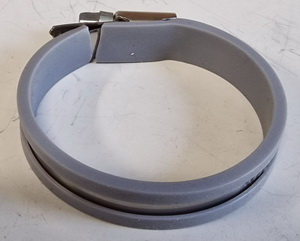 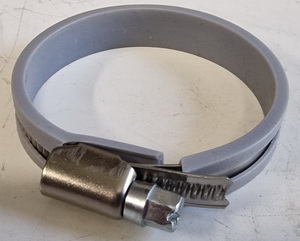 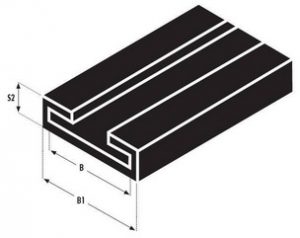 The table below gives the different sizes of hose clamps you need plus the approx. length of the rubber seal per clamp. 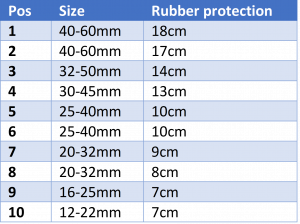 Next you have to construct the base plate, radiator plate, guy plates and the spreader plate. For this version I had the aluminum base plate (15×15 cm square) and radiator plate (15 cm round) laser-cut. The radiator plate has also the bands indication engraved with laser. See the attached PDF for the construction details. For the connection of the radiator and radial wires I placed aluminum rivet nuts (for M5 bolts) in the plates. Also the bracket with the SO239 connector is fixed with 2x M5 bolts. 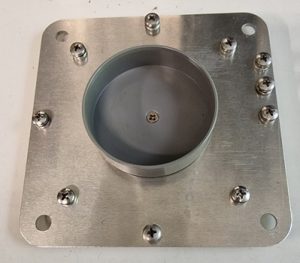 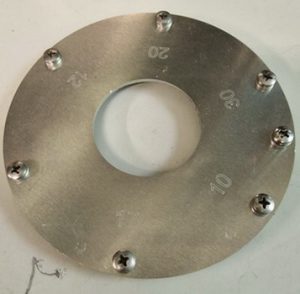 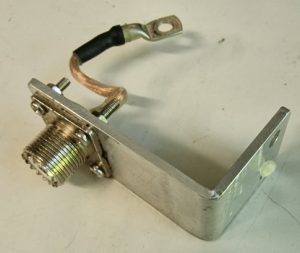 On the base plate I fixed a 70 mm PVC end cap to keep the pole in position.

The guy plates and spreader plate are made from IKEA breadboard. For the guy plates I use 8 mm thick materials (grey) and the spreader 3 mm thick material (white). The plates I cut with a saw and used a file to smooth out the surface. The inner holes are drilled with a hole-saw and with a file made exactly fit around the respective section of the pole. I used a Dymo for the labels to indicate the right hole (the smaller 7 mm holes) for the radiator wires. The bigger holes are for the carabiner hooks for the guy wires.

Constructing the radiator and radial wires 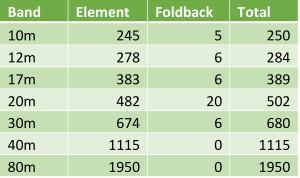 Since I’m a CW operator, I tune the antenna for best performance at the CW part of the bands.
Cutting table from PG5M are the exact measurements after fine tuning. When you start building the antenna, you needs some extra length to allow an initial SWR measurement and start cutting until you reach the desired resonant frequency. Perhaps you start with the cutting table of Callum in the first place. Please note that the velocity factor of my radiator wire is not known, my dimensions may also differ when you use your own wire with probably a different velocity factor.

Since I have used a bit longer pole than the original design, I was able to use a full wavelength radiator for 40 meters, so no foldback wire as in the design of Callum. Since I tune the 40 meter in the lower part of the band, it gives also a better tuning for the 15 meter band. 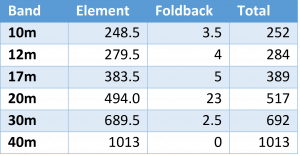 I wanted to use cable lugs with a 90° angle so the wires going directly straight up, which is a better construction. This is different from the construction used by Callum.
To avoid the wires to kink, I use heat shrinkable tube with glue around the lug and the wire. Because I could only find cable lugs for 6 mm2 wire, I had to use two layers of tube for proper fit. I used approx. 2-3 cm of 6 mm and 9 mm tube. Further I use small number-cubes with a 3 mm hole to identify the band. See pictures for details.
On the 40 meter radiator I fixed a small loop (loop of wire fixed to the wire with heat shrinkable tube) some 20 cm below the middle spreader. With that you can place a shock cord from the loop to the spreader plate to keep tension on the lower part of the 40 meter radiator. A similar loop I also made on the top end of the 40 meter radiator. 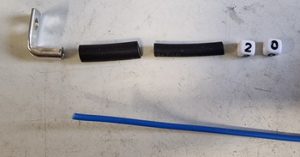 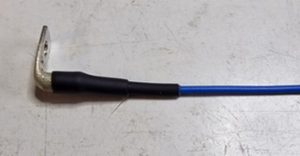 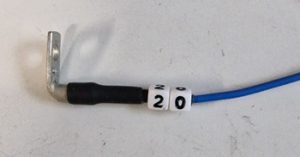 At the end of the top section of the pole I use a PVC cap to close the tube. Inside the cap I have a small round piece of wood that goes inside the tube. A small screw with eye goes into the piece of wood. A little loop of shock cord with carabiner hook goes through the eye of the screw. The carabiner hook goes through the loop at the end of the 40 meter radiator. This give a little tension on the upper part of the 40 meter radiator. 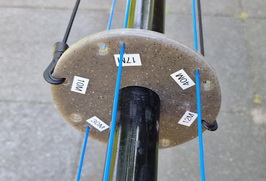 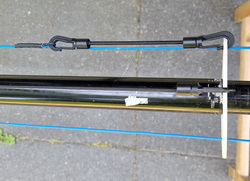 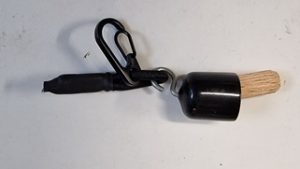 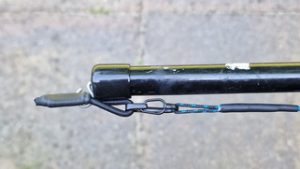 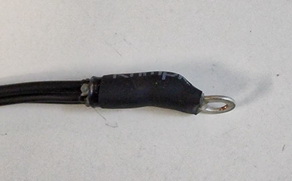 For each radiator, except 40 meters, you have to make a piece of shock cord with a plastic carabiner on each side. The length of the shock cord you have to determine in practice, provided that you get enough tension on the radiator wire. I used Dymo labels to identify the shock cord for the respective band.

The radials are made in a similar way, with 4 radials in one cable lug. This results in 8 cable lugs with a total of 32 radials of 3.5 meters long. For the radials a bought a coil with 100 meters of 0.75 mm2 twin cord which I ripped up to have 200 meters of single wire.

Guy ropes
I have one set of guy rope that are attached to the first guy plate at 3.25 meters above ground. I use four 3 mm Mastrant guy ropes with a pulley ratchet. In normal conditions, this is sufficient guying. However, for those situations where you may expect heavy wind, I have made an extra set of guy rope. This is 2 mm Mastrant rope with Mastrant plastic guy tensioners. 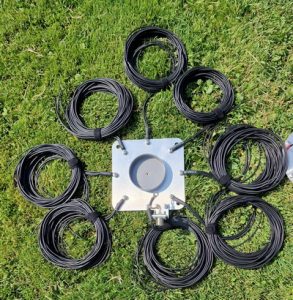 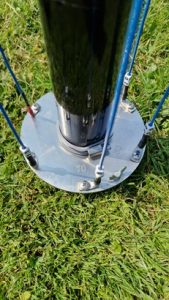 Fix the bracket with SO239 with two M5 bolts to the base plate. For transportation I have coiled all radials sets. Connect each set of 4 radials with the cable lug to the base plate with a M5 nut. When all 8 sets are connected, place the base plate at the center of the area you will use. Measure in 4 directions 5 meters from the base plate and insert the guy stakes in the soil or use whatever fixation point you have or can create.

Next position the assembled pole with the radiator plate aside of the base plate and the pole laying next to one of the guy stakes. Now you can attach the guy ropes with a carabiner hook to the first/lower guy plate. Fix the other end with the tensioner to the guy stake. You can do that for 3 guy ropes.
Now you can erect the pole that will kept straight up with the three already fixed guy ropes. The fourth guy rope can now be attached to the remaining guy stake. Now tilt the pole a little so you can place the bottom in the PVC cap of the base plate. When done, connect the flying head of the SO239 with a M5 nut to the radiator plate. 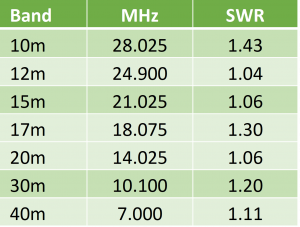 Packing
As mentioned earlier, I want to have a good packing for the antenna. I selected a rather cheap rifle case with foam set. With a sharp knife you can cut the compartments for the pole, hardware and wires/ropes. My case with complete antenna has a weight of 9.5 KG.

I hope this article is of use and perhaps helpful in case you are going to build your own DX Commander. Feel free to contact me if you have further questions. Thanks go to Hans – PA1BX to offer his backyard for experimenting and testing the antenna.

There are two PDF files with detailed information. You can find them in the download folder in this web site or via these links: