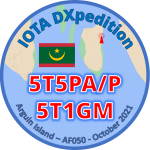 My friend Johannes PA5X has been living and working for three years in Mauritania. During that period, he was very active as 5T5PA and during the 2021 IOTA contest also as 5T5PA/P from Arguin Island, AF050. As I’m very interested in activating islands (IOTA), I suggested to Johannes going there again but now together and having a bit more equipment and antenna’s. He agreed immediately and we started to do the planning.

Arguin is an island of Mauritania in the Arguin Bay, which is 12 kilometers off the coast. The island is 2 km wide and 6 km long, it has an area of 12 km². It belongs to the Banc d’Arguin National Park, an UNESCO World Heritage Site. There live only 2 families on the island who are engaged in fishery. This is a community of approx. 30 people, including children. They live in a very harsh environment and everything they need for life (except fish) must come from the mainland. That includes food, fresh water, fuel, etc. They also lack electricity and mobile communication.

The island changed hands frequently during the colonial era. The first European to visit the island was the Portuguese explorer Nuno Tristão, in 1443. In 1445, Prince Henry the Navigator set up a trading post on the island, which acquired gum Arabic and slaves for Portugal. By 1455, 800 slaves were shipped from Arguin to Portugal every year.
In 1633, during its Dutch-Portuguese War, the Netherlands seized control of Arguin. It remained under Dutch rule until 1678, with a brief interruption by English rule in 1665. France took over the island in September 1678, but it was then abandoned until 1685. Arguin’s aridity and its lack of a good anchorage made long-term European settlement difficult. Read further on this web site.

The Banc d’Arguin National Park lies on the west coast of Mauritania between Nouakchott and Nouadhibou. Fringing the Atlantic coast, the park comprises sand dunes, coastal swamps, small islands, and shallow coastal waters.
It is a major breeding site for migratory birds. A wide range of species include flamingos, broad-billed sandpipers, pelicans, and terns. The park’s vast expanses of mudflats provide a home for over two million migrant shorebirds from northern Europe, Siberia, and Greenland. The region’s mild climate and absence of human disturbance makes the park one of the most important sites in the world for these species. The nesting bird population is also noted for its great numbers and diversity—between 25,000 and 40,000 pairs belonging to 15 species—making the largest colonies of water birds in West Africa. Read further on this web site.

Johannes started to organize the local logistics and paperwork. Without his experience and connections, this would have been impossible to do. I had worked on a homemade DX Commander antenna for 40-10 meters and prepared it for the trip to 5T.
We fixed the dates and arranged the flights and started to deal with the documents, PCR test, vaccination papers, etc. Our flight was first to Las Palmas (EA8) on October 13, staying there the night and taking a flight next day to Nouadhibou in Northern Mauritania. I booked for 40 KG luggage but finally had more than that.

At Amsterdam airport we checked in but were not faced with additional costs for excess luggage. At Las Palmas we rented a small apartment for the night.

Also for the flight to Nouadhibou we were lucky that we did not have to pay for excess luggage. After arrival we met with the local friends who had prepared our DXpedition and two of them, Khazem and Bahbah would also accompany us during the whole trip.
Since we would go to a small island where there are only two families living, everything we needed we should bring with us. That resulted in a long list of materials and supplies. Think of a 5 kVA diesel generator with 180 liters of diesel, vegetables, bread, other food and lots of bottles with water. An arrangement was made that a fisherman would come from the island with his boat to pick us up.
As there is no coverage by a mobile telecom network on the island, I organized a small satellite device which would enable us to send and receive short messages (162 characters). With this device we could also send messages to our Twitter account to inform the DX community.

At 07:00 local time we left Nouadhibou with two heavily loaded cars on the N2 highway. We travelled for about two hours on a tarmac road and then we turned right into the dessert. No road signs and we had to rely on the knowledge of our driver Khazem to find his way to the sea. It took us about 30 minutes (40km) to reach the shore. Now it was a matter of waiting until the fisherman on the island would notice that we arrived, but to our surprise we saw him already coming in our direction.

When the boat was at the beach, we started to load all our equipment and supplies in the boat. There were some very heavy boxes and drums with fuel and water but were no problem to get into the boat. The generator was something different. With a weight of 175 KG, we all had to help to get it from the car directly onto the boat. The cars were left on the beach and off we went to the island. That boat ride took only 15 minutes.

At the island the boat was unloaded, this time with the help of one more fisherman. But from the beach, everything had to be carried to the camp side where the local community had setup two large tents. That was a distance of about 200 meters and with some elevation. This looks not a big deal but with a temperature of 45 degrees Celcius it is not easy. The large boxes and the generator were loaded on a kind of lorry and carried to the tents.

As soon as we had the antenna materials at the camp site, we started to work on assembling the antennas. I started with the homemade DX Commander and it took me less than an hour to have it ready. For the installation we choose a location about 75 meters away from our radio tent and close to the sea. We tested the SWR which was OK so we could start assembling the next antenna, the Hexbeam. That was somewhat more work but straight forward as we had done that before. The mast for the Hexbeam were two iron pipes with a rotating platform on top. The challenge was to find something to lift the mast on one side high enough to attach the Hexbeam. If you have installed a Hexbeam already yourself, you know the challenge. We decided to use a small cabin for this and two people could stay on top of that while the other kept the mast in position. Once the Hexbeam was fixed. We put it in vertical position and fixed the guy wires.

By the time we had the DX Commander and the Hexbeam ready, it was close to 19:00 local time. I unpacked my radio equipment and assembled the radio station on one of the nice tables we brought with us. It was the SunSDR2 DX with homemade power supply, SPE 1.3K amplifier and the laptop. I also recently purchased from AliExpress a small stainless-steel paddle that I wanted to test during this trip. It has 3 strong magnets that can fix it firmly on a metal surface. Since I had to use it on a wooden table, I fixed it on a 7×7 cm metal plate and used nano-tape to stick the metal plate to the table. The paddle worked great and is now my DXpedition paddle (it measures 7x3x3 cm and is only 230 gram).

We had worked the whole day and in a temperature of 45 degrees Celsius which made that we all were exhausted. We decided not to start the radio operation but take some rest and food and start more energized the next morning.

In the morning the generator was started, and we commenced our operation.
At the end of the day, we were informed that we had to shut down the generator, dismantle the antenna’s and leaving the next day. We operated till late that evening.

In the morning we could not use the generator and therefore started to operate on car batteries. In this situation we used only 100W from our transceivers and could not use the amplifiers.
Early morning, we started to discuss why we had to shut down our operation. With lengthy discussions we learned more about what the problem was. After clarification of what we were doing, we came to an agreement and could continue again but were asked to depart on Tuesday, a day earlier than planned. That means our short operation would even be shorter.
So as soon as we had reached the agreement, we started the generator again and could use the amplifiers and started full power operation. We continued operating the whole day and were served by Khazem and Bahbah with traditional Mauritanian tea and meals. We really had the luxury of having a great support team which actually allowed us to dedicate our time to the radio operation.

To be honest, we also took off some 30 minutes to go to the sea for a refreshing dip and also to do a bit of clean up since we did not use fresh water for washing.

Yet another full day of operating and again a jump into the sea which was very refreshing.

We started at 7AM to took down the antenna and packing all the equipment and supplies. The boat was scheduled to leave the island at high tide which was around noon. We had to make sure that before 11 AM all equipment and supplies were at the beach, ready for lifting it aboard the boat. Surplus food was already given to the local families some days earlier and now we also left surplus water.

We were rather fortunate that the whole morning it was cloudy and therefore no direct radiation of the sun. This was completely the opposite from the first day when we had to build the antennas with the sun burning on us.
As a kind of donation, we left the two (operating) tables, two office chairs, two new car batteries and a roll of 100 meters thick rope. This was for the two fishermen who used their boat and helped us a lot.

When the boat was pushed partly on the beach, everything was loaded on the boat which went rather quick. Even the heavy generator was not a problem to lift onto the boat. Around 11:30 we were ready and left the island and arrived at the mainland some 20 minutes later. There the same exercise started again, this time to bring everything from the boat onto the two cars. One of the last things was to fill up the tank of the car with diesel that we did not use for the generator. With that we could drive all the way to Nuoadhibou.

By 12:20 we set off to Nouadibou where we arrived around 15:00 at the hotel. At one of the checkpoints at the road we saw they had stopped a bus because none of the passengers were vaccinated. However, some 100 meters away there was a tent where they carried out vaccinations!
The first thing I did in the hotel was taking a good shower. The next most important action was to upload the log to Clublog now we had internet again.

This was a day of relaxation and doing administrative work. Johannes still had some other activities in town. Together we spend lunch and diner to conclude our amazing DXpedition.

We left the hotel at 8 AM heading for the airport. We said farewell to our local friends and entered the airport. With the usual procedures and checks we left Nouadhibou on time.

Operation was with CW, SSB and FT8 on 40-to 10 meters. QSL via the home call – Clublog. Together we made 7K+ QSO’s in about 30 operating hours. Log analysis from 5T1GM are as follows: